When did Thomas Senior begin his flying service?

TOMMY SUMMERSILL: My Dad (Thomas R.) started in the business in 1958. He was not incorporated at that time, but he was actively working as an ag pilot. He had some of his own local contracts in Florida, and he was flying for other operators as well. He got some contracts with a couple of large growers, which brought us down here to south Florida around 1960-61. We’ve been here ever since. We’re located a little bit south of Belle Glade, but Belle Glade is our official city address.

Dad started his business with a 220 Ag Cat. He was dusting vegetables in south Florida. By default if you’re a child of a crop duster, you’re automatically a mixer-loader. I grew up in the business, and Dad sent me to Embry-Riddle to learn how to fly. When I finished Embry-Riddle with all of my certificates and my A&P license, I came directly to work for Dad here in 1974.

Rick Stone and I have been trying to figure out when Dad got his first Air Tractor. We bought the last new Ag Cat we owned in 1974. We flew a couple of Ag Cats and we had some Pawnee Braves and a Stearman thrown in here and there. I believe we bought a tall-tailed AT-301 about as soon as they came out. We fly Air Tractors exclusively now, but back then we flew a mixed fleet for a number of years – through the 301s, the 401s and then ultimately the turbines, beginning with the 402 in 1996-97. 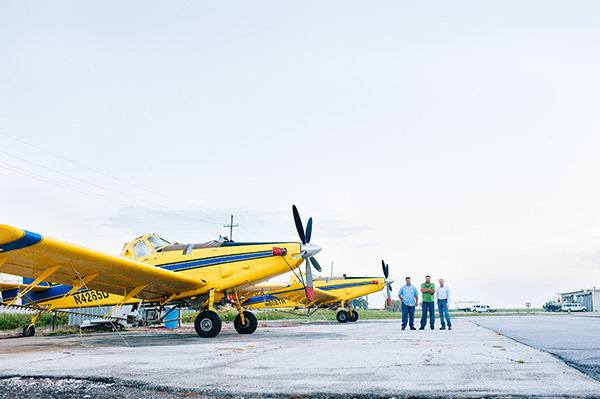 TOMMY SUMMERSILL: Today we have a pair of 802s. We graduated from the 402 to 502s – we owned several of them along the way. Of course bought all our Air Tractors through Southeastern Aircraft. We flew a 602, and then on to the 802s that we have now. We’ve got a 2,600-foot asphalt airstrip going north and south, that we built back in the 60s to accommodate Ag Cats. Believe it or not, we’re flying the 802s off that same airstrip quite comfortably.

How big a role does your Air Tractor dealer play in your day-to-day operations?

TOMMY SUMMERSILL: To be honest, we would not have a business today without Chuck and Rick Stone and Southeastern [Aircraft Sales & Service]. The late 1950s is when the industry really got its started here in south Florida. Chuck Stone, my dad, Fred Ayres and a few others started the Florida Agricultural Aviation Association back in 1965. So we go way back together.

We view Southeastern as a partner, more than you would typically think of as a dealer. We use their shop exclusively for our 802s because we don’t have a big hanger and we’re in a kind of a remote location. But we’re just a 20-minute flight away from Rick. If I can’t get the airplane to Rick, and if it’s an emergency situation, Rick will make sure that I’m cared for here. If the airplane is not movable, the work can be right here on our airstrip with his maintenance crew. We have viewed Rick, through the years, as more of a business partner than just a separate entity that sells airplanes.

It’s been an extreme pleasure dealing with Southeastern and Rick Stone. Our families have known each other since the 50s. Dad and I both knew and respected Leland, and of course now Jim Hirsch and all our friends in Olney are carrying on Leland’s vision; it’s just been a real pleasure working with Air Tractor through the years.

What was the business like in those early years?

TOMMY SUMMERSILL: I had about 5 years of flying with the guys that started the business here in Florida. When I began flying with Dad, the industry was transitioning from dust to spray. We were flying open cockpit airplanes, inventing how to spray. That part of the industry was changing dramatically. In those early days we were pilots that used an airplane to do something that was productive on a farm.

We’ve evolved since then into agri-business and spray aircraft are a part of the farmer’s toolbox to use in the production of his commodity. So in 40 years, our business has gone from being a novelty to something that the growers—especially the larger growers—actually depend on to produce the commodity they’re invested in. Responsiveness has always been a part of our business. And the dependability of the turbine really raised the bar on that. We’re not out there changing cylinders on a 1340 in order to do a job.

Back when Dad started, it was a very short season. It was about 6 to 8 weeks for sweet corn. Now we have about 12 months of activity, involving everything from corn, sugarcane, fresh vegetables, row crops and citrus, as well as odds and ends such as pasturelands.

We fly about 600 hours per airplane, per year. The application volumes range from 2 gallons to 15 gallons per acre.

In 40 years, our business has gone from being a novelty to something that the growers—especially the larger growers—actually depend on to produce the commodity they’re invested in.
— Tommy Summersill —

As forty years have passed by, what things haven’t changed in the business?

What’s not changed? The need to respond quickly to a grower’s situation. Here in south Florida we have some very difficult growing conditions, so we have to be able to respond to that.

The need for aircraft to be technologically advanced – GPS, flow controls and record keeping. There are going to be some sea changes in those areas because with the EPA and their desires weighed against what growers need to grow their economy, there’s just going to have to be some very hard data as to what the airplane is doing at all times. No guess-work. Right now, the pilot is still involved in quite a bit of it. But I think in the future, the pilot is going to be flying the airplane and there’s going to be a lot of technology doing the rest of it for us. I think the next generation of that stuff is going to be quite phenomenal. I believe drones are going to have a place in the industry. It’s going to be a very niche part, but I don’t think a drone is going to replace what aircraft do now. There is a generation of growers out there that are really technologically savvy, but they are also economically savvy. It’s a dollars and sense thing.

Particularly in the ag aviation industry, the grower wants to know the guy who’s making the decisions, who’s flying that airplane. He wants to have a personal relationship – not necessarily with the operator – but with the guy flying the airplane. We see that becoming more and more important as the years go by.

How are the responsibilities divided among you?

TOMMY SUMMERSILL: Jeff flies full time. We have another full-time pilot that flies the other 802. I no longer fly. We have two ground crew members that work specifically for the airplanes. I basically manage the company – and my blood pressure.

Bret is not involved in the flying part of our business, but he is the third generation and an important part of our business. We have a ground spraying business that employs another 6-8 people. Bret manages that. We designed our own mobile mixing equipment that works with both the airplanes and the ground rigs. It works very well for us. From this location, we try to keep our work within about 25 miles. We have several satellite locations that we operate from. Anywhere south of Orlando is kinda our area.

Fuel economy! That’s the big one. We just did a big job not too long ago where we flew a 502 on the entire job, and then we did the entire job again with an 802. And surprisingly, the fuel used per acre by the 802 was less than the 502. And that’s because of the efficiency of the 802. So while we understand the cost in fuel for having that much power on the nose of the airplane, if that airplane gets even more efficient than it is now in swath width and deposition ability, then I think you really answer the question about fuel economy. Because the engine is going to burn what it burns. But if Air Tractor can make it more efficient in doing what it does, that would be the key to the future for us.